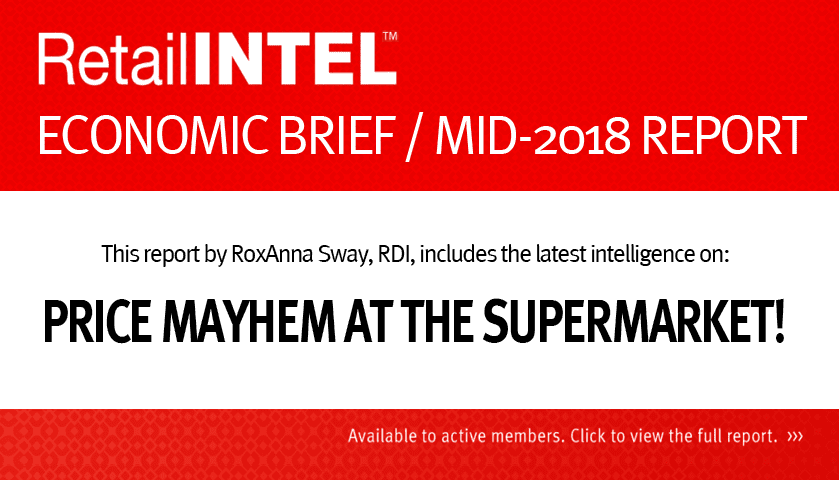 Gathering storm clouds are beginning to cast shadows on what has been a recent fairly-positive economic period, with a bull-market for stocks that has lasted nine years, the third longest stock market upswing in history, and produced a gain of around 200 percent to date—rebuilding much of its recessionary loss of around $15 trillion. Retail Intel uses the term “fairly-positive,” because the economic recovery, while dramatic overall, has not lifted all boats. Stock market gains have been highly concentrated and dominated by large technology stocks. Just five companies: Apple, Amazon, Alphabet, Microsoft and Facebook make up more than 15 percent of the S&P and account for more than one-third of the $2.7 trillion increase in value in the past 12 months. Those who were not invested in these technology companies, and a few select other sectors, probably did not do as well. Additionally, the number of Americans invested in stocks has fallen precipitously, from 65 percent in 2008 to 50 percent today, including 401k accounts. It is the wealthy, the greatest share of stock holders, who have profited the most in the recovery, and it is the wealthy who will benefit the most from the recent tax changes. In the meanwhile, it took nearly six years into the recovery for the average 401k account to begin to recover from its losses, and it was 2014 before the price of a home owned by an average American began to significantly recover from the catastrophic close-to 35 percent drop in housing prices that hit the country during the Great Recession of 2007-2009.

Of concern now, there are threats of global trade wars and rising import tariffs. We are already seeing rising prices on imported steel and aluminum, and on U.S. made steel and aluminum which have had already price increases of 33 percent and 11 percent, respectively, and which directly affect construction and auto production. The 20 percent tariff instated last year on lumber from Canada has pushed lumber prices to record highs, adding an average of $9,000 to builders’ costs per new home. The EU began imposing $3.3 trillion in tariffs on U.S. goods, in July, and tariffs on $50 billion in Chinese goods coming into this country went into effect in mid-June, with additional Chinese tariffs waiting in the wings. There is also worrisome financial instability in emerging markets, which is producing more economic turbulence than seen in many years for that sector.

In the U.S., combine all of this with the highest mortgage interest rates in 7 years, the highest annual increases in consumer goods prices since 2012, and rising inflation that is eroding income increases for working-class Americans that might have come with the recent tax changes (according to the Labor Bureau, the CPI reflected inflation of 2.9 percent in June), and Americans may be looking at a host of new economic challenges….

Report by: RoxAnna A. Sway, RDI